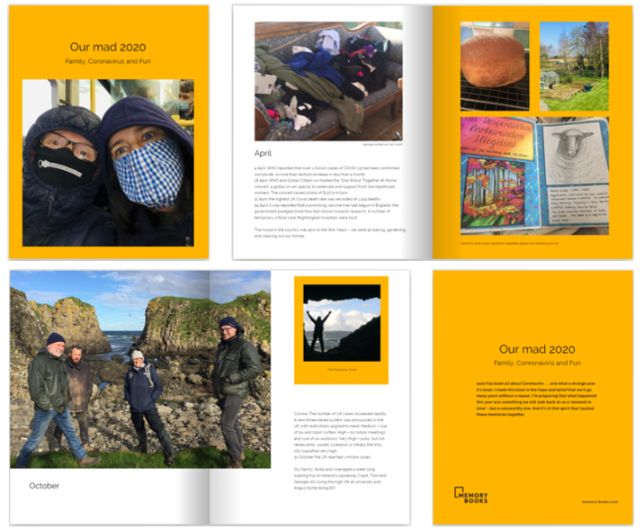 What a strange year it’s been – whether you loved it or hated it, it’s been a moment in history.

A pandemic certainly wasn’t unprecedented - we’ve had movies (from 2009’s Zombieland to 2011’s Contagion) and even board games (my sister gave me the 2008 Pandemic cooperative board game for Christmas). Around 2005/6 big business spent a lot of time building their crisis management pandemic plans (see this Harvard Business Review article from May 2006). And we had some false alarms with the Bird Flu (H5N1) and Swine Flu (H1N1) crises over the years. But this year it finally happened!

I write this blog in the hope and belief that we’ll go many years without a repeat. I’m proposing that what happened this year was something we will look back on as a ‘moment in time’ . . . a truly noteworthy moment. And in that spirit I’m creating a 2020 Memory book . . . and I think you should too!

A Memory Book is essentially a photobook with words – with as many or as few words as you want. The photos I’m using are determined by what I already have on my phone.  The words are a combination of a) memories of any trips, special birthdays and get-togethers and b) news updates on COVID-19 as it unfolded during the year.

Our Memory Book has 36 to 48 pages. If you are the organised type, you could have an equal number of pages per month. To give you the precise instructions if you are so inclined: you could do two double page spreads for each month. But there’s always an exception to prove the rule – you would have to compromise and have just one spread for one of the months as the maximum we can cope with is 23 spreads. I’m pretty sure you’ll have had a quieter month and that this is something you can accommodate. I however am not that disciplined and, as I had a slow start to the year and also managed to sneak in a couple of trips, I’ll add more content for the holiday memories.

A month-by-month account of how the COVID-19 Pandemic unfolded (mostly from a UK perspective):

At the start of the year, we knew there was something afoot in Wuhan, China. And on 1 January the WHO set up an Incident Support team. Through January we all learnt about COVID-19 and by 30 January the WHO reported 7,818 confirmed cases worldwide, though just 82 of these cases were in 18 countries outside of China. The WHO gave a risk assessment of very high for China and high at the global level.

No-one was using the word ‘pandemic’ yet. The outbreak was largely restricted to China, though Italy was showing a sharp increase in cases and two cruise ships had been affected. Many of us though were all still merrily booking trips for later in the year.

On 10 March the stock market started to go haywire and major companies in the UK started to tell people to work from home. We all knew someone who had it.

On 13 March the number of new cases outside of China became greater than those in China.

For the first time I became aware that Coronavirus was going to affect my plans for the year. We realised flights would be cancelled, though we had no appreciation of the full extent of things to come. Like the ‘Short-War Illusion’ I was optimistic that trips in the second half of the year would be unaffected.

14 March – no loo roll, eggs, pasta or paracetamol were to be had in Tesco!

Italy had quarantined the entire country.

On 16 March Boris Johnson advised against non-essential travel and social contact, suggesting people work from home and avoid venues such as pubs, restaurants, and theatres.

On 18 March we were shocked to hear that A levels and GCSEs were cancelled! Schools were shut, not to be reopened until further notice.

On 20 March the government announced that all leisure establishments were to close as soon as possible and promised to prevent unemployment.

Everyone in Britain seemed to have taken up walking!

On 23 March, along with more than 250 million people in Europe, the UK was placed in lockdown. Boris Johnson banned gatherings of multiple people and non-essential travel and outdoor activity. “Without a huge national effort to halt the growth of this virus, there will come a moment when no health service in the world could possibly cope.

“You must stay at home, only leaving:

“That’s all – these are the only reasons you should leave your home. You should not be meeting friends or family members who are not part of your household.”

Unlike previous measures, these restrictions were enforceable by police through fines and dispersal of gatherings. Most unessential businesses were ordered to close.

The penny finally dropped: “If we don’t change our behaviours drastically now, then the cascade effect of current contact will put too great a pressure on hospital beds in the future.” We were all worried about the impact on the economy. And were thrilled to have our children at home with us. They were less thrilled :-)

On 4 April WHO reported that over 1 million cases of COVID-19 had been confirmed worldwide, a more than tenfold increase in less than a month.

On 18 April WHO and Global Citizen co-hosted the ‘One World: Together At Home’ concert, a global on-air special to celebrate and support front line healthcare workers. The concert raised a total of $127.9 million.

On 21 April the highest UK Covid daily death rate was recorded of 1,224 deaths.

On 24 April it was reported that a promising vaccine trial had begun in England; the government pledged more than £50 million towards research.

A number of temporary critical care (Nightingale) hospitals were built.

The mood in the country was akin to the War Years – we were all baking, gardening and clearing out our homes.

Tesco was open for limited hours, early slots reserved for the over 70s and NHS and other key workers. Queues to enter snaked around the carpark and many items were still not available – the shelves standing empty. There was a one-way system implemented through the store and we were not allowed more than two of any one item. And oh we got grumpy with the people that invaded our space, went the wrong way and generally only thought about themselves!

On 10 May ‘stay at home” was changed to “stay alert”. We could see friends for walks, but they could not come into the house and we had to maintain a two-meter distance. People returned to work where they couldn’t work from home. We were advised to start wearing face masks.

Deaths in care homes accounted for a third of UK coronavirus deaths.

On 23 May it was announced that travelers from France had to quarantine for 14 days.

UK schools reopened in a phased manner. The track and trace system was implemented.

On 23 June the ending of the lockdown restrictions in England was announced. Businesses including pubs, restaurants, hotels and hairdressers could start reopening from 4 July. We were encouraged to continue following social distancing guidelines (but reduced to 1 meter). Up to two households were allowed to meet indoors and outdoor gatherings were not to exceed six people.

On 25 June we had a major heatwave – half a million people travelled to the Dorset Coast – so much for social distancing!!

On 27 June travel companies reported that holiday bookings had ‘exploded’ as the government announced plans to ease quarantine restrictions on travel abroad.

On 29 June 2020, WHO warned that the spread of the virus was still accelerating as countries reopen their economies, although many countries had made progress in slowing down the spread. Leicester was put into lockdown due to a spike in cases.

More companies announced they were going into liquidation and many more announced job losses. More quarantine restrictions were lifted. The wearing of face masks became mandatory.

On 17 July a further easing of restrictions was announced along with the use of public transport for non-essential journeys.

However, a second wave over the Winter was predicted.

Other cities in the North faced restrictions as numbers increased.

On 13 August the A level results were published and were the cause of much debate!

Anyone holidaying in France returned to a 14-day quarantine!

Schools and universities opened pretty much as normal though uni lectures were online wherever possible. The number of cases gradually increased.

On 24 Sep it was announced that pubs and restaurants had to close at 10.00pm in an attempt to slow down the increase.

There was much speculation and reporting on vaccines.

Outbreaks at universities were prolific but managed effectively.

The number of UK cases increased rapidly. A new three-tiered system was announced in the UK with restrictions aligned to need: Medium = rule of six and 10pm curfew; High = no indoor meetings and rule of six outdoors; Very High = pubs (but not restaurants) closed. Liverpool was initially the only city classified very high.

On 5 Nov a second UK lockdown commenced (for four weeks).

In early November Denmark reported on an outbreak of a unique mutated variant being transmitted to humans from minks.

On 9 November Pfizer released their trial results for a vaccine, showing it to be 90% effective against the virus. Later that day, Novavax entered an FDA Fast Track application for their vaccine.

On 9 November the United States surpassed 10 million confirmed cases of COVID-19, making it the country with the most cases worldwide by a large margin.

There was much debate about what should and shouldn’t be allowed for the Christmas period with it finally being announced that three households could meet up (indoors and outdoors) between 23-27 December.

A new tier system was announced with most places in Tier 2 and much of the Midlands in Tier 3.

8 December the first UK person was vaccinated, and the rollout began.

On 14 December Public Health England reported a new, more infectious variant had been discovered in the South East of England.

19 December London and much of the South East were put into Tier 4 (no mixing at all) and, to much sadness around the country, nationwide Christmas plans were limited to just Christmas Day.

On 20 December many countries halted all flights from the UK; and the France-bound Eurotunnel service was suspended and ferries cancelled as the French closed the border.

On 31 December the number of new cases in the UK reached their highest yet at 55,892 (a truly scary number of people), though thank goodness deaths (at 964) were slightly below the April peak.

At year end more than 83.5 million Covid-19 cases have been reported worldwide and more than 1.82 million people have died. And as this is according to lab tests the true number could be about eight times this – meaning more than one in ten people around the world have been infected.

My thoughts and best wishes to all those families that have lost loved ones, to people who have suffered directly from the disease and those who have experienced loneliness and other difficulties because of it. I desperately hope 2021 is a better year for you and yours!

For details on 2020 Covid-19 updates and events see the first half of the year here and the second here.