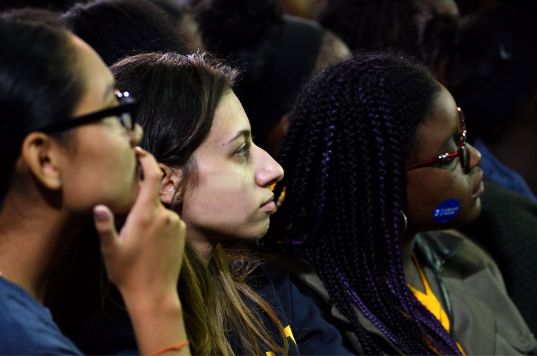 Which women inspire you the most?

In honour of International Women’s Day which occurred on 8th March, and National Women’s History Month being celebrated throughout March, we’ve thought about some of the women who inspire us. We all have a woman close to us who inspires us – our mum, grandma, partner, sister, aunt or friend, for example. But there are so many inspirational famous women that are looked up to as role models too. It got us wondering, what would the Memory Books of these women look like?

Probably best known for being the first African-American woman to be First Lady of the USA, Michelle Obama is much more than just Barack Obama’s wife. Photo: Philadelphia, PA, USA - September 28, 2016: Young voters listen to the speeches at the rally with First Lady Michelle Obama.

Before taking on the role of First Lady in 2009, Michelle graduated from the esteemed Princeton University and Harvard Law School, and had a successful legal career. On becoming First Lady, Michelle became a role model for girls and women around the world. She has worked as an advocate for poverty awareness, education, LGBT rights, and health, and is seen to be a strong, compassionate woman and loving wife and mother. Since leaving the white house, not only has she been enjoying life with her family, but she has continued her activism, published a best-selling autobiography, made a documentary and has regularly updated her podcast. We’re tired just thinking about getting all that done!

So, what sort of Memory Book do we imagine Michelle Obama to want to create? With everything she has achieved and experienced in her life she would be the ideal person to create a Life Story Memory Book. The book would be a stunning way to depict her life through photos, from her upbringing and childhood, through her law career, meeting Barack and starting a family, to her unique days in the white house and everything that has come after. It’s certainly a Memory Book that we’d like to flick through!

Seen by many as a national treasure, Clare Balding is known for her sports journalism and broadcasting, and for being a total animal lover.

Clare Balding has made a name for herself in the male dominated world of sports journalism, probably best known for her horse racing presenting on the BBC and her coverage of Olympic and Paralympic games. She’s also been the face of Crufts for many years since 2004, where her love for animals shines through in her presenting. You see her love for animals again when you look at the multiple books she has written about them. She is a strong advocate for women in sports and its link to women having political freedom. She was appointed and OBE in 2013 and has earned many other awards for her work in TV and journalism, and is a supporter of a number or worthy charities.

We think Clare wouldn’t be able to resist making a Memory Book dedicated to her cats Button and Eric, and Button’s loveable kittens who were born last summer. Just a quick scroll through her social media and it’s easy to see how much she loves her pets, and a Pet Memory Book would be the purrfect (we couldn’t resist that pun!) place for her to keep all her treasured memories of their adorable antics.

A wonderful British actress who has over the years gone from beloved British TV shows to critically acclaimed Hollywood movies, it has recently been announced that Carey Mulligan is nominated for the Best Actress Oscar award for the second time.

Carey Mulligan may not quite be a household name just yet, but her back catalogue work is varied and exciting, featuring numerous films that have reached worldwide critical acclaim and awards. Besides her work in theatre, TV and films, Carey Mulligan is a compassionate advocate for two worthy charities: Alzheimer’s Society and War Child. Her true talent, hard-working attitude and commitment to these important charities make her a wonderful role model and inspiration to women everywhere.

We believe that Carey would be most interested in our Dementia Memory Books, in honour of her grandma who lived with Alzheimer’s disease for 17 years, who is the inspiration behind her charity work towards awareness and research into the disease. A Dementia Memory Book is designed to help those living with dementia and memory loss to remember their family, lives and interests, and to bring them joy and comfort in difficult times.

A household name in the world of cookery and baking, how many of us have a trusted Delia recipe that we go back to time and time again?

Delia Smith has been an influence on the culinary habits of the UK since the 70’s when she started writing regular columns in different newspapers, and shortly after started to appear on TV. Over the years Delia has inspired many women to try new things in the kitchen through her TV shows and best-selling influential recipe books. There’s even a phenomenon named after her: “The Delia Effect” where her use of particular ingredients and utensils can cause a significant rise in sales, even to the point of selling out! On top of being one of the most inspirational and influential celebrity chefs, she also has an OBE and a CBE – Delia is undeniably an iconic British woman.

It’s easy to guess what Delia’s Memory Book of choice would be – a Recipe Book. The great thing about our Memory Books is that they truly are unique and can be easily personalised – anything you can think of to document, you can do. A recipe book is a wonderful way to collect together your favourite recipes, photos and tips, and share them with others. You’ll be the next Delia in no time!

Joanna Lumley has inspired women for many years, from her days as the hilarious Patsy in Absolutely Fabulous showing that women really can be funny, across her long lasting TV and film career, to her dedication to her activism. She is an advocate and human rights activist for Survival International and the Gurka Justice campaign, and supports many charities and welfare groups for animals. Her charity work and love for exploring has led her to travel to all sorts of amazing places, where she has done charitable work, filmed TV programmes, or simply relaxed and enjoyed a holiday!

With all the beautiful and interesting destinations Joanna Lumley has been, we are sure she would adore a Travel Memory Book to store all her precious photographs and memories to look back on in the future.

The inspirational women in your life

Who inspires you? Whether it’s your partner, mum or grandma, a friend or other relative – if there’s a woman in your life who inspires you, why not create a unique Memory Book just for them. As you can see, there’s all sorts of things you can put into a Memory Book, and it’s the perfect gift to show someone special how much you care.